The origin of iGEM

The iGEM Summer competition is introduced! 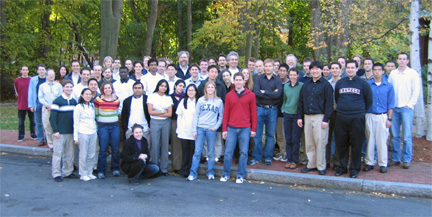 First robot to do automated assembly at HQ

Medals are introduced to the competition

Safety considerations are formalized in the team projects

One new Track is introduced:

iGEM makes the cover of Nature

as the shipping backbone for all Part submissions

Exceeded the capacity of MIT

Teams compete in their Region before a selection of those teams advance to the World Championship!

iGEM graduates from MIT and becomes an independent nonprofit organization

and finds a new home at One Kendall Square in Cambridge, MA is held in Boston, eliminating the Regional Jamborees.
All participants are once again invited to participate in one grand event!

Team Heidelberg introduced The Ring of Fire, a method of heat stabilization of proteins by circularization

With 2300 participants, the 2014 Giant Jamboree was the largest gathering of synthetic biologists to date

Special Gallery Exhibition Space is given to teams to showcase their Hardware, Art & Design and Software projects

The iGEM Diversity committee is formed

Team TAS Taipei developed To Granzyme B or Not to Granzyme B: Protecting Extracellular Matrix Proteins

Microfluidics track is replaced by the new Hardware track

Over 2,700 attendees joined us the Giant Jamboree The Health & Medicine Track is split into two new tracks, Therapeutics and Diagnostics

HQ Representative Program is introduced as a way to better connect teams with staff members of iGEM HQ!

After iGEM program launches to support our international network of 30,000+ academics and industry professionals beyond the competition!

Foundational Advance is the noteworthy track of the year, selected by all three finalist undergraduate teams

AshesiGhana and Georgia State both win the Chairman's Award

Team Vilnius-Lithuania created SynORI, a framework which allows scientists to build a multi-plasmid system in a standardized manner

The First After iGEM Summit was held after the Giant Jamboree, gathering iGEMers in career development workshops and talks

Team Valencia UPV created Printeria an intuitive, affordable bioengineering device that opens the field of synthetic biology to artists, educators and others.

The first edition of the iGEM Digest is published; collecting stories from iGEMers all around the world

Teams no longer submit samples to the Registry, thanks to DNA synthesis by iGEM partners

The iGEM from above photo becomes a video!